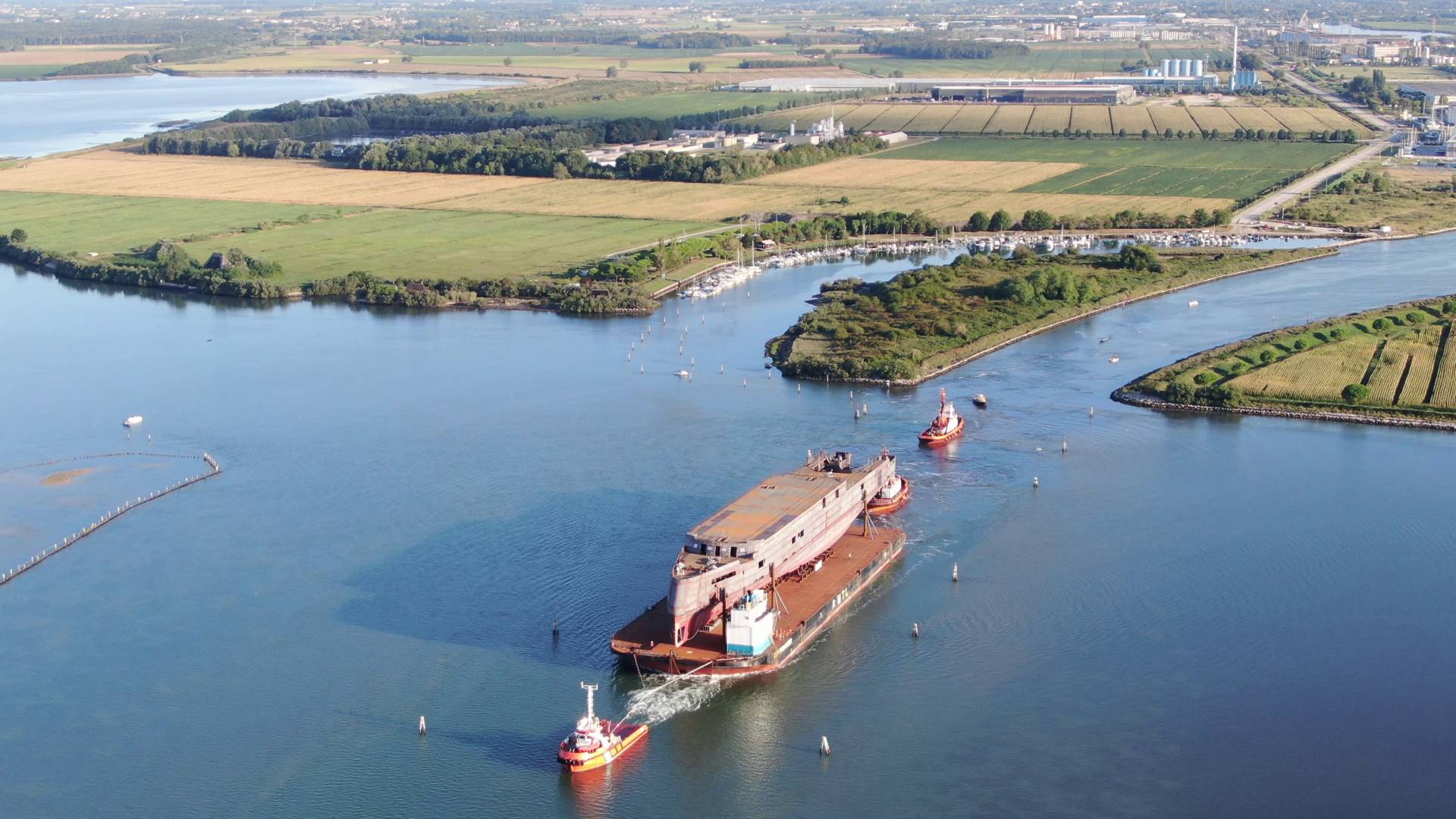 San Giorgio di Nogaro, 4 September 2020 - The operations for the technical launch of the hull of the new ferry under construction for RFI -Rete Ferroviaria Italiana (FS Italiane Group) have been completed. The load out and float off operations have been carried out at Cimar shipyard in San Giorgio di Nogaro by the technicians of T. Mariotti and San Giorgio del Porto, part of Genova Industrie Navali Group. The hull of the N/B "Iginia" is now heading to Genoa, under tow by Tug Gianemilio C., where the construction will be completed in the coming months.

During the sea passage towards Genoa, the ship will transit for the time in cross the Messina Strait, where she will return by own means, once in service, of Messina for the first time and then return there in autonomous navigation, with the RFI livery.

The single end Ro-Ro type ship - for the transportation of railway carriages, wagons, passengers and vehicles - is intended for connections in the Strait of Messina and was commissioned by RFI - Rete Ferroviaria Italiana to the Temporary Association of Companies composed by T. Mariotti and San Giorgio del Porto, which won a European tender. The ship, 147 meters long, 19 meters wide and with a capacity of 2,500 tons, will travel at a speed of 18 knots and will boast highly advanced technological, functional and performance characteristics.

The 3.100 tons hull float off was prepared through dock maneuvers and underwater analysis with georadar scanning, while the launch phase - to which took part Mr. Carmelo Rogolino, Mr. Daniele Allegra and Mr. Adriana De Luca for RFI and Mr. Marco Ghiglione for the ATI - saw the use of SPMT self-propelled trolleys combined in 160 axles and of Augustea's AMT Commander semisubmersible oceanic barge, big as a soccer field and capable of a semi-dive of about 13 meters.

The ferry was finally hooked to tugboat Gianemilio C. and on September 3 she left for Genoa where, if the weather conditions are good, she is expected to arrive in about ten days and where she will be docked at the T. Mariotti and San Giorgio del Porto quays. There, the hull already equipped with engines, generators, propulsion machinery and systems, installed on board during the preliminary fittings at San Giorgio di Nogaro, will be completed with the installation of the two funnels and of the superstructures already prepared in the previous months; the work will then continue with the furnitures, the railway equipment and the completion of all systems.

"In recent years Genova Industrie Navali has aimed at consolidating and making increasingly complementary the businesses of the individual companies that are part of it and of the facilities located in different cities, making the most of synergies and individual expertise - says Mr. Marco Ghiglione, Managing Director of T. Mariotti - The launch of this hull, in addition to being a milestone project, represents a success in the growth path of our Group, as well as a great source of pride and confidence for the future”.

The program of activities has undergone several variations due to the complexity of the operations and in compliance with the regulations imposed by the current Covid-19 health emergency. Thanks to the professionalism and the consolidated synergy between the companies involved, the technicians of Cimolai, Fagioli and Rina, the local workers, the Port Authority of Monfalcone, Nogaro and Grado, the pilots, the moorers, the port and offshore tugboats, the maritime agencies and all the professionals involved, it was possible to complete the operation in complete safety. 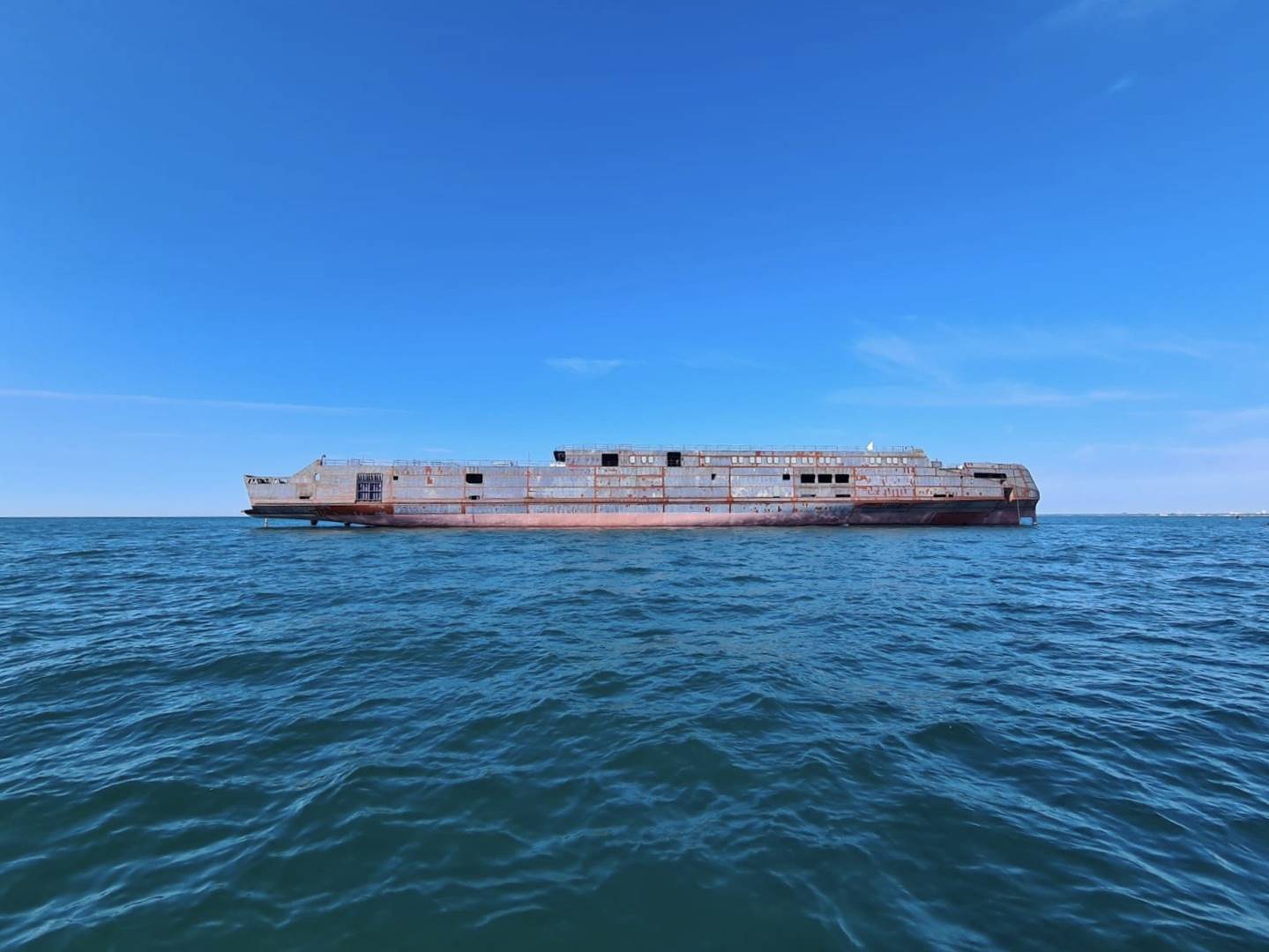 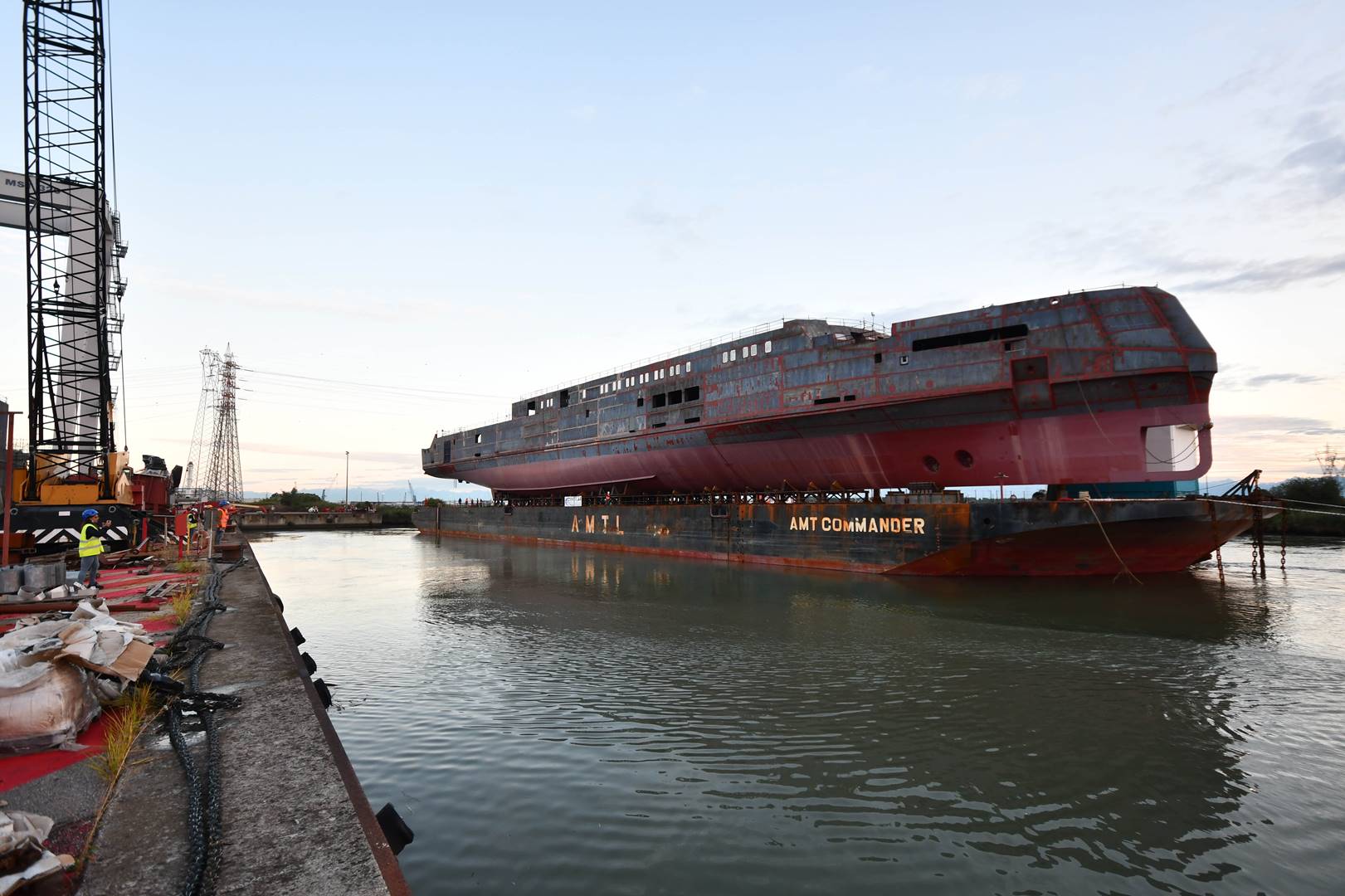 Coin Ceremony for the new Ferry Ship of RFI

RFI, Strait of Messina: placed the order for the construction of the new ferry ship

The order for the construction and supply of a mono-directional Ro-Ro ship - for the carriage of railway carriages and wagons, passengers, wheeled veh...

Winning Enterprises of Liguria and Piedmont were celebrated in Cuneo. The initiative promoted by Intesa Sanpaolo was an opportunity to share the valua...

The hull of Seabourn Pursuit arrives in Genoa for the final outfitting phase at Cantieri T. Mariotti

Built by T. Mariotti, the ship, sister ship of Seabourn Venture, is destined for Antarctic cruises   29 April 2022 - Seabourn Pursuit, the...

The USS Mount Whitney refitting project has been finally completed.

The USS Mount Whitney refitting project has been finally completed. After more than four months the flagship and command ship of the United States Six...

GENOA, 28 December 2020 - With the arrival in Genoa of the Saipem FDS offshore unit, San Giorgio del Porto, the historic shipyard of the Group, consol...

San Giorgio del Porto and Chantier Naval de Marseille will be present at SMM 2022. We are very happy to take the opportunity to enjoy this great ev...

A new route for Genova Industrie Navali: the Group renew itself and presents the new logo

Gerolamo Scorza is excited to announce the attendance at Cruise Ship Interiors Expo in Miami, June 2022 We are very happy to take the chance of enj...

The Saipem FDS refitting project has been finally completed

After more than three months of refitting the pipelayer Saipem FDS has left Genova for new projects. The work in numbers: 21.049 t Gross Tonn...

The Seven Seas Navigator ship refitted some decks and cabins and underwent some technical maintenance including the installation of scrubbers.

The Nautica vessel of Oceania Cruises underwent refurbishment of decks and cabins and technical maintenance, including the installation of scrubb...

San Giorgio del Porto and Chantier Naval de Marseille will be present at SMM 2022. We are very happy to take the opportunity to enjoy this great ev...

T. Mariotti and Neptune have signed a contract to launch "Project Sama", the first vessel for the Aman Luxury Brand

Project Sama represents the first ultra-luxury at sea experience from Neptune Co., a joint venture of Aman Group and the Cruise Saudi.   Pr...

Seabourn Venture reaches another milestone during launch cerimony in Genoa

Seabourn Venture marks another milestone as hull is moved to Genoa for final outfitting Seabourn, the ultra-luxury cruise line, is celebrating anot...

Students visit the shipyard as part of a Confindustria project

On 29 November, the students of the Istituto Tecnico Nautico San Giorgio visited T. Mariotti Shipyard as part of the "Genova Capitale della Cultu...

T.Mariotti and Genoa University partner together to promote innovation and research

T. Mariotti, part of the Genova Industrie Navali Group, and the Department of Architecture and Design of the University of Genoa "DAD" have...

The financing for the construction of two Seabourn ships was finalized

The operation was led by Intesa Sanpaolo (lead bank), Banca Imi (Arranger and Bookrunner) and Mediocredito Italiano to finance the construction of two...

T.Mariotti has been choosen among the hidden places in town to be revealed during Genoa Shipping Week. The shipyard, exceptionally open to the publ...

First steel cut for Seabourn Venture, due for delivery in june 2021 by T.Mariotti

The ceremony that marks the first milestone in the construction of the new expedition ship, Seabourn Venture, for Seabourn, the world's finest ult...

The T.Mariotti shipyards intervened at the university meeting enttitled: Refitting Design, shipbuilding and refitting. The meeting is part of the Ent...

Gerolamo Scorza recently had the opportunity to reaffirm its strong presence in the domain of the interior design, through the refurbishment of 31 Pub...